The portrait of a prince poem FOR CLASS 8 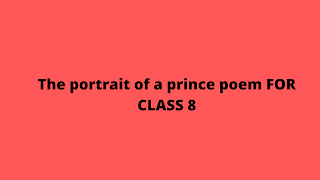 We’ve grown accustomed to being terrified of tigers due to their appearance. It’s our natural reaction when we hear about tigers, but Denis Martindale’s poem Portrait of the Prince depicts tigers in a more detailed way. It defines not just a tiger’s physical look but also its profound psychological and emotional characteristics. It showed the other side of a tiger, not just the frightening aspect, but also the courageous side.

In stanza  1, the tiger’s face is portrayed in great detail and an explanation of what artists and sketchers do is given. Etchings are a type of artwork in which they utilize charcoal to sketch a subject. Another characteristic is tattoo art, which creates a tattoo by cutting deeply into the person’s body. As a result, I use these terms to describe the tiger’s face’s black stripe patterns. Because it is known for its meticulous attention to detail, use the word define to refer to the usage of high definition or hi-res photographs, which provide us with better quality and more detail.

stanza  2. The tiger’s ears are always tuned in to its surroundings, and the rustling of the leaves could be a way for it to detect who or what is around. It’s possible because our sense of hearing has progressed to the point where we can recognize and remember sounds instantaneously. As a result, mental filters are the way the tiger’s brain reacts to different sounds and categorizes them as either a potential threat or a prey item.

In stanza 3, the tiger’s eyes are described, as well as how predatory creatures, like as tigers, may stare us down without showing any fear. They don’t avert their gaze as if they are terrified of us. They gaze at us with such a fixation that we know they aren’t backing down or fleeing, and they will either push us to make the first step or decide to do so themselves. So the decision to fight or flee is up to you. The tiger is swift and powerful in either case. So what’s the big deal about the tiger being scared? As a result, we are intimidated by the tiger’s look. The tiger’s eye gemstone is also a lovely piece of jewelry.

stanza  4, which is about the tiger’s nose, has an extra writer’s device in the form of the run-on sounds of the two ‘words know and So. They lead to the sound of the two words that make up the phrase “know So,” and they connect to the word “nose.” Humans and other animals have odors that predator animals can detect, which hunters are aware of. If we are aware that the tiger has discovered us, it is prudent to keep a close check on what the tiger will do, as tigers are capable of attacking rapidly and with lethal force.

stanza  5; The tiger’s mouth is mentioned, but we should concentrate on the fangs inside because they can kill the tiger’s victim. Small swords with a straight or curved blade, known as daggers. The tiger’s canine teeth are depicted in this poem.

We know that the tiger’s teeth will show no mercy because he exhibits no mercy. Tigers do not spend their days flashing their canine teeth. The term “tight-lipped” refers to the act of concealing something. The combination of the upper and bottom teeth working together is the tiger’s secret weapon in this battle.

The tiger’s neck depicts the elegance of a tiger who isn’t scaredy-cat in verse 6. Instead, here’s a big cat to fear. That isn’t to say the tiger must be ferocious at all times. The tiger is self-assured and equipped with all of the senses required for hunting and survival. This species stands out simply because of its size. So there’s no need to constantly swivel your head to see what’s around the corner. The tiger is poised and aware, and in this way resembles a prince in command. The tiger doesn’t have to do any more proving.

stanza  7, the tiger’s sovereignty is discussed, as well as his unique high-ranking status. Because of his superiority over others, he doesn’t consider anything to be on par with him. To a tiger who can chase, catch, overpower, and kill him, the man appears insignificant.

‘Until Man can establish otherwise, this is the tiger’s world and kingdom.’ There are not hundreds of tigers like this one. As a result, all he knows is what he has learned thus far. Nothing has lowered his self-esteem. Why should you trust a tiger? Because of his animal cunning, he will go to any length to achieve what he wants. Because he will not stop hunting his prey,

stanza  8 is about the tiger’s speed. Whatever he decides, his legs will obey him, whether it’s due to severe hunger or simply to retain his hunting skills. He has the ability to quickly rise to his feet and sprint through the environment. He is well aware that the region he is in is his territory. A trespasser is a man. Why should the tiger surrender or yield?

‘The poem cautions readers to flee, if possible, for as long as possible. It makes no difference how quick we are. The tiger’s speed is all that matters. So why put yourself in danger by getting too close to a tiger when there’s a way out?’ The lyric foreshadows both peril and laughter. Readers may smile or frown, but no one is in danger when they read the poem. The warning becomes crystal evident only in real life.

questions & answers-The adventure of a mason