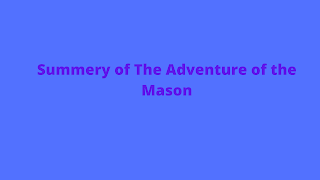 Summery of The Adventure of the Mason

The story ‘Adventure of the Mason’ is about a poor mason who lived in the city of Granada in Spain. He was exceedingly impoverished, barely scraping by to support his huge family.

A knock on his door jolted him out of his slumber one day. A stranger approached him and offered him a job, promising to pay him fairly. He told him that he needed to work at midnight and that he needed to be blindfolded. The mason consented, and the man carried him to the location, where he was commanded to build a vault and load it with gold jars.

The mason completed the work and lived off the money he earned for a fortnight, but he eventually became impoverished.

A landlord came to his house one day and asked him to repair a house for a very low price, claiming that it was haunted. The mason agreed and said he would stay in the house and fix it.

He recognized the residence as the one where he had constructed the vault and stuffed it with cash. He gradually began to amass wealth.

1. What was the fate of a poor mason?

Ans ; The impoverished mason resided in the Spanish city of Granada. He was exceedingly impoverished, barely scraping by to support his huge family.

2. What was the mason’s task, according to the landlord?

Ans; The mason met the landlord’s expectations by agreeing to do patch work for less money and offering to live in his house rent-free until he found a better tenant.

3.In court, the mason’s blindfold was removed. What was the location of the court? Over there, what did the mason see?

Answer: After removing the bandage from his eyes, he found himself in a dimly lit court lit by a single lamp. The barren basin of an antique Moorish fountain stood in the center. The court was positioned on the second floor of the structure.

4. Why did the landlord complain about the house of the “old miser”?

Answer: The landlord complained about the ‘old miser’s’ house since it was deteriorating and costing him more money to maintain than it was worth because no one would live in it.

5. “Now you must assist me in bringing the bodies that will be buried in this vault forth.”

a)  Who spoke “these words” and to whom did they say them?

Answer: This is what the guy stated to Mason.

(b) How did the mason react when he first heard these words?

Ans ;The poor mason’s hair stood up on his head as soon as he heard these remarks. He followed the visitor into a retired chamber of the home with nervous steps, expecting to see some horrific display of death, but instead saw a few portly jars standing in one corner of the room, much to his relief.

5. Do you believe the mason was both truthful and astute? Provide justifications for your response.

Answer: The mason was truthful since he never revealed the vault’s secret to his son and heir until his deathbed, and he did not open his eyes until the cathedral bell tolled, as the stranger had requested. He was astute as well, as he cleverly asked the landlord to allow him reside in his house rent-free in exchange for him repairing it. He then used to take money out of the vault as and when he needed it. As a result, he became one of Granada’s wealthiest men.

6.What frightened the mason? When did his mind become more at ease?

Ans. The mason was scared by the prospect of burying the remains. He was expecting to see a gruesome death scene, but was relieved to see three or four large jars full of cash standing in one corner.

7.After handing over the two gold pieces, what did the visitor order the mason to do?

Ans. The stranger requested that the mason keep his eyes closed until he heard the cathedral bell ring for morning prayer. Evil will fall upon him if he dares to open his eyes before that moment.