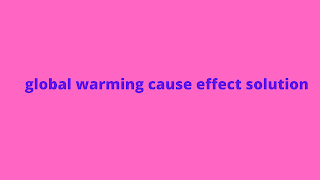 The rise in average global temperatures on Earth over time is referred to as global warming. It has been attributed to man’s large-scale deforestation for several reasons. We use a lot of fuel every year. It has become impossible to supply people’s fuel needs as the human population has grown. We must use natural resources wisely because they are scarce. When natural resources such as forests and water bodies are overexploited, the ecosystem becomes unbalanced. The rise in temperature is only one aspect of global warming. It has a variety of other impacts as well.

For ages, the climate has been shifting. The natural rotation of the sun causes global warming by changing the intensity of sunlight and bringing it closer to the planet. Greenhouse gases are another contributor to global warming. Carbon monoxide and sulfur dioxide are greenhouse gases that capture solar heat rays and prevent them from escaping the earth’s surface. The earth’s temperature has risen as a result of this.

A single volcanic eruption, for example, will release a significant amount of carbon dioxide and ash into the atmosphere. When carbon dioxide levels rise, the earth’s temperature rises, and greenhouse gases trap solar radiation.

Finally, methane is a contributor to global warming. Methane is a greenhouse gas as well. Methane is 20 times more powerful than carbon dioxide at trapping heat in the atmosphere. Methane gas can usually be found in a variety of places. Cattle, landfills, natural gas, petroleum systems, coal mining, mobile explosions, and industrial waste processes are just a few examples.

Since hundreds of years ago, greenhouse gases have remained in the atmosphere for many years. Global warming, on the other hand, will have disastrous consequences for the planet. If global warming continues, a slew of negative consequences will emerge. Melting polar ice caps, economic effects, warmer waters and more hurricanes, disease transmission, and earthquakes are all examples.

Recycling is another approach to help prevent global warming. Reusing plastic bags, bottles, papers, or glass can help to minimize waste. When purchasing meals, for example, we can use our own containers rather than plastic bags. Another example is that once we’ve finished drinking the water from the bottle, we can either reuse it or replace it with our own bottle. If all of this is reused, humans can help save the ecosystem and minimize deforestation. Furthermore, if the electricity is not in use, turn it off. It can reduce thousands of tons of CO2 and purchase energy-efficient products to save money and the environment.

To save gasoline, we can opt for a hybrid vehicle that consumes less gasoline. Furthermore, the cost of gasoline is rising. If a person drives to work every day, he or she will need to refuel after three days, resulting in carbon dioxide emissions. Taking public transportation or carpooling to work is another option to save money on gasoline. It has the potential to cut carbon dioxide emissions while also saving money.

EFFECT OF GLOBAL WARMING ON CROPS

According to a recent report, describing the consequences of failing to dramatically decrease global emissions, By the year 2050, staple crop yields may have fallen by roughly a third.

EFFECT OF GLOBAL WARMING ON animals

According to new research, animals are “shapeshifting” in order to prosper under the stress of climate change. Modifications in animal habitat and life history as a result of global changes in the environment are no longer a new theory, but a reality, according to the study. In reaction to rising temperatures, animals are expected to adjust the size of their limbs.

Paragraph on Importance of Tree Plantations

how to write an essay for the beginners -sikhhaguru

essay on my pet for class 7