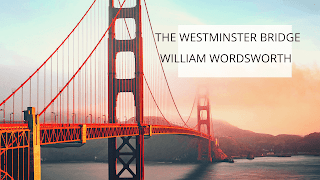 1.”A sight so touching in its majesty”― which ‘sight’ is referred to in the line? How does the poet describe the beauty of the ‘sight’?

Or
The substance of the poem

Or
Justify the title of the poem- Composed upon WESTMINISTER BRIDGE

Wordsworth is a great poet of nature and most of his poems reflect the natural beauty and the rustic landscapes, but The Westminster bridge is one of the rare poems where he describes the cityscape. The poet was going to France, crossing the Westminster Bridge over the Thames in a coach early in the morning with his sister Dorothy Wordsworth on 31st July 1802 between 5 am and 6 am. He was overwhelmed, seeing the beauty of London, and wrote down that poem.

The sun is just pleasant and the great city of London is bathing in the first light of its splendor. The poet is deeply impressed by the beauty of the scene. Wordsworth seems it to appears to be the loveliest sight. None ignores this unparalleled and majestic sight. only a person with having a dull soul can ignore this natural beauty. The city seems to wear garments of golden sunbeams.

The city is very quiet and visible. The sky is clear and dustfree and smoke-free. There is no noise in the atmosphere. Everything is quiet and quiet. Everything in the city such as ships, towers, houses, theaters, temples, etc. is clearly visible even in the green fields lying far away in the unadulterated morning air. Everything shines brightly in the golden rays of the rising sun. The valley, the rock, and the hill look beautiful at sunrise. But the city of London is the most beautiful. The river (Thames) flows freely. Its course is not hindered by the movement of boats or ships. The very houses seem to be sleeping. London, the heart of the country, remains calm and quiet as if by a roaring giant. The poet made a pleasing statement to God, the creator of all goodness in the world, expressing his sincere gratitude to Him

2. In Wordsworth’s poem “Upon Westminster Bridge,” how is “personification” utilized to convey the beauty of London?

The attribution of human form or other attributes to something other than a human being is known as personification.

This rhetorical method is used by Wordsworth to convey the grandeur of London. He personifies the Sun, the Thames River, architectural elements, as well as the whole city of London. The Sun rises, the River flows, the structures sleep peacefully, and the City, with its great heart, adorns the morning’s glory-like clothing. Wordsworth has attempted to create a deeply embedded belief in his imagination by personifying natural elements, not only to make his explanation more lively, but also to ensure the deeply embedded belief of his mind: nature is living, and it is the origin and embodiment of the gorgeousness that is loved by someone who is not dull of soul.

3. What kind of wonder did Wordsworth explain in In his poem

Wordsworth was enthralled by the sight of London in the early dawn, when the sun shone brightly across the city. He noticed the River Themes streaming under the bridge in a melodious style, elegantly and peacefully. He noticed that the entire city was soundly sleeping. All of the sites that were normally teeming with activity were eerily quiet at the moment. The setting gave a stunning image of incomparable charm, with London, the heart of England, throbbing with hectic activities, appearing to be in slumber and at rest at dawn, and enjoying the silent beauty of London. Despite the fact that this sonnet was written in 1802, it has retained its freshness and beauty throughout time. In truth, it is a perennially motivating sonnet for nature lovers.

4.In his poem “Upon Westminister Bridge, “why does  Wordsworth address God ?. What exactly does he mean when he says “mighty heart”?

Ans: William Wordsworth is so captivated by the whole sight of London in the early dawn that he expresses his passionate feelings through an exclamation in his prayer to God. He seemed to be thanking God for the opportunity to witness nature’s deep and serene beauty. It gives him a sense of aesthetic pleasure. The poet appears to be in a state of awe and delight as if he is a child. As a result, he has thanked God for His gracious presence.
The composer personifies London by connecting it to a giant’s heart with the phrase “mighty heart.” The city serves as the country’s capital and the hub of all activity. When a giant awakens, it howls with its enormous appearance. Similarly, the city is a cacophony of noise during the day. The roaring of a giant can be heard among the hustle and activity of the capital city. The city, on the other hand, is fully still and unmoving in the morning. A screaming giant appears to have been soothed to slumber. As a result, the city of London is symbolically described as having a “mighty heart” to inspire awe and admiration.

5.What did Wordsworth have to say about London’s beauty

From the Westminster Bridge, Wordsworth describes the splendor and splendour of London.
The poet was taken aback by the gleaming sun. It appeared that everything in view had donned the fresh morning’s clothing of beauty. The ambiance was serene. Ships, towers, domes, theatres, temples, tossing fields, and blue sky were plainly apparent in the smokeless air, adding to London’s glitter.

Ans. Wordsworth shares his sentiments about the early morning splendor of London in the poem “Composed Upon Westminster Bridge.” From the Westminster Bridge, which spans the Thames River, the poet observes the cityscape. It’s early morning, and the sunlight has just broken through the clouds. When the sun’s golden beams descend on London, everything sparkles and shines. The composer is so moved by the grandeur of this scenario in London that he personifies the city by claiming it “wears the beauty of the morning.” The poet here employs a superb analogy to help people comprehend his emotions, which he derives from this lovely early-morning London cityscape. Perhaps its loveliness will fade away once the morning has passed.

7.In your own words, describe the opening lines of the poem Sonnet written on Westminster Bridge.

Nature’s beauty has always been a central element in English poetry. Wordsworth is describing a magnificent picture of London taken early in the morning from the Westminster Bridge. Because of the smokeless atmosphere, the gleaming sun, which was at its peak brilliance, made it able to view ships, towers, and domes quite well. Everything seemed to be clothed in the new morning splendour. The vista had a grandeur to it, and the loveliness impressed and delighted a poet like Wordsworth.

8.In his poem, Wordsworth describes what scene on earth and in the sky?
Wordsworth found the land and sky to be both inspirational and fascinating. The keen admirer of natural beauty was overjoyed to discover the special enchantment of the city of London’s attractiveness from Westminster Bridge.

questions and answers of shakespeare: OTHELLO for class 11