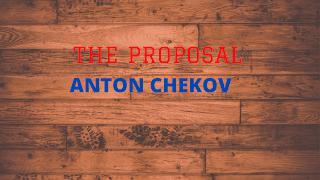 Justify the title of the play proposal

proposal’ is a one-act play  written by Anton Chekhov which portrays 19thcentury’s social and economic features of Russia. The play title works well because The whole play is about Lomov proposing to Natalya. All methods of the characters in the play are influenced in some way by a marriage proposal. From start to finish, The story focuses on the promotion of marriage. A visit to Lomov Chubukov’s house to propose to his daughter Natalya. However, before he could lift her they started arguing over  Oxen medows. As a result, Lomov gets sick and leaves. later, Chubukov informed Natalia that Lomov had come to propose her for marriage. she begins to mourn for the loss of the chance to get married as she wants to get married. Lomov is also called. But  Chubukov with Natalya started arguing with Lomov over the superiority of the dogs. However, the proposal was successfully made in another way at the end of the game. Therefore, we can say that the title is apt and appropriate.

Sketch the character of lomov

Answer: Lomov was a funny man. Physically he was weak but financially healthy. He was a wealthy writer who wanted to marry Natalia. He was not really in love with Natalia but wanted to marry her because he thought she was a good housekeeper and beautiful. He said that if he wished to find true or true love, he would never marry. He felt that he was 35 years old, and now he had to live a peaceful and normal life. When he went to pick her up, she was distracted. In fact, Natalia thought she had come to take the oxen’s pasture as her own, and there was a quarrel between them. Sometimes they argue over small things. Before he could ask her out, he fainted and then shouted loudly but finally managed to get accepted.

Sketch the character of Natalya

: Natalya is a beautiful and educated girl of 25 years. And he is a good housekeeper. However, he is short-tempered and intelligent. He is serious about dating and his father calls him a sick cat. According to Lomov, she looks educated as he is abusive and unable to control his speech.she argues with Lomov over Meadows as she says she does not like injustice but when she knows that Lemov has come to propose to her. She changes her attitude and regrets losing the marriage opportunity. So she was an opportunist. When Lomov returns from being called by his father she starts down again and fights with him over the issue of their dogs. This tells the reader that she has a compelling habit of arguing. He also appears to be the dominant woman as he puts Lomov down with her quarrels and anger.

In the play, Proposal Anton Chekhov introduced three characters. Stephen Chubukov is one of them. He was the owner of the land with a daughter named Natalia. He was very argumentative but had a habit of talking respectfully to everyone at first. He welcomed Lemov in a respectful manner and was delighted when he said that he had come to propose to his daughter. Chubukov was someone who should be taken lightly and so when Natalya and Lomov got into an argument he joined and insulted Lomov. Chubukov represents the father of 19th century Russia who wants to fulfill his parental responsibility by getting his daughter married anyhow.  Chubukov is portrayed as a loving father because he supported his daughter in all the arguments against Lomov. But he is a greedy man who  does not wants to lose a chance for a good bride for his daughter.

In Anton Chekov’s time marriage was very important  matter, because it was the means to gain social and econonic stability  in the society .In this one act play,  marriage has been shown as the prospective  hope. Chekov illustrates  logically  and even humorously  that 19 th cebtury Russia gives less inportance to love and emotion  than property and social security.

Firstly The marriage  proposal  is very important to Lomov,  because he has reached the critical  age of 35, besides he is suffering  from many psychological disorder and insonomia. So he wants a responsibile  and skilked wife to lookafter him as well as his vast property. He knows that Natalya will be good match to  take care of his property and himself as she is educaded. So he comes to Chubukov house to propose Natalya.

Secondly The marriage proposal is equally  important  to Natalya, because she is 25 and she is crossing the age of maaiage. In 19th century Russia, women could gain stability  in society  by marriage . So she wants to gain economic and social stability  by the means of marriage with Lomov.

Thirdly,  The marriage  proposal is also  very important to  Chubukov,  because he is 75 years old father of a grown up daughter, Natalya.He wants to get relief from the burden of a grown up daughter by getting her married.So he becomes  very happy when Lomov proposes him for her daughter.

In the one act play, “The Proposal ” Anton Chekov  draws a clear picture  of the 19 th century  Russian Society. That society  did not pay any attention and importance  to love and emotion. People of that society  ran Towards  moneymaking  like machines, sacrificing their emotional  needs. In the 19th century  Russia , marriage was no a bond  of two hearts,  but  a tool  for economic  and social  stability . Chekov also shows that how the landowners  exploted the landless peasants in 19th century  Russia .  The aristocratic society engaged  themseves in futile  occupations like hunting and racing dog to pass time. Apparently  they were very sober, but they did not hesitate  to abuse eachother at the time of arguments .

We obtain a clear image of the analysis of two dogs Guess and Squeezer from Natalya’s, Lomov’s, and Chubukov’s arguments. The combat in Anton Chekhov’s ‘The Proposal’ is one of the most amusing scenes. Natalya inquires about Lomov’s hunting plans. He explains that his dog, Guess, has gotten lame as a result of this. They then begin debating over their dogs’ supremacy. Natalya thinks he’s a loser for spending 125 rubles on Guess. Squeezer, their better dog, costs only 85 rubles. Squeezer’s weaknesses, according to Lomov, are that it is overshot and hence a bad hunter. Squeezer is described by Natalya as a pure dog, while Guess is described as a nasty, decrepit, unattractive, and worn-out cab-horse. Chubukov, Natalya’s father, joins the service in the meantime. Guess, he pointed out, is ancient and has a short muzzle. As a result of their ridiculous disagreements, the play is amusing.