Abdul Pakir Zainul-Abedin Abdul Kalam who is an Indian scientist known as Dr. APJ Abdul Kalam and the eleventh President of India was born on 15 October 1971 in a Tamil Muslim family. His father Joynal Abedin was a boat owner in Rameshwaram, Tamil Nadu He came from a poor family, and at a very young age, he started earning some money to help his father run the household. After finishing school he started selling newspapers to help his father. He was interested and he was immersed in books, especially in mathematics. In his autobiography, Kalam says that he got a sense of humility and discipline from his father, and from his mother, he got great faith and deep kindness. 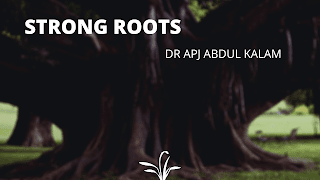 1]WHY WAS KALAMS CHILDHOOD  SPIRITUALLY AND MATERIALLY SECURED?

The essay  “The strong Roots” has been extracted from the very first chapter of the much-celebrated autobiography of APJ. Kalam “The Wings Of Fire

A P J Kalam came off in the island town of Rameswaram in an erstwhile madras state. He was a boy from a middle-class Tamil family. In Rameswaram Kalams’s family lived in their ancestral house which was made of limestone and bricks. Moreover, it was very large.  Kalam’s father was Jainulabdeen, an austere man. He had innate wisdom, though he had not any formal education. He avoided all inessential comforts and luxuries, but he always provided essential things like food, medicines, and clothes. His mother was Ashiamma who fed a number of outsiders in her home. Kalam always ate with his mother, sitting on the floor. Kalam’s father brought kalam every day to a nearby mosque what helped Kalam to strengthen his spiritual mentality. In fact, Kalam got the lesson of love, affection, generosity, and practicality from his parents that made his childhood both materially and emotionally secured.

2)Justify the title of ‘The strong ROOTS’

The essay “The strong Roots” has been extracted from the very first chapter of the much-celebrated autobiography of APJ. Kalam “The Wings Of Fire” .

This part describes his mother’s generosity, his father’s religious wisdom, and his community’s communal harmony. His mother’s generous s “spirit, and his father’s religious beliefs and practical wisdom have made him a perfect man.  He had a very secure childhood both materially and emotionally, which helped him to learn the lesson on universality, fraternity, humanity, and divinity. This lesson makes him like a full-fledged tree i.e THE TREE OF WISDOM.  Actually, Kalam was the tree and his parents were the roots of the tree. A tree becomes big when its roots become strong and supply proper nutrients.  Similarly, Kalam becomes a legend because he got proper grooming from his parents just like the roots. Hence the title of this part of the autobiography is apt and appropriate.

3)How does Kalam describe his father’s routine life?

Kalam has expressed great admiration for his father. He has said his father led a very austere life and avoided all inessential comforts. Here Kalam has described his father’s disciplined life. Kalam recollects that his father,  Jainulabdeen started his day at four am by reading the namaz before dawn. Thereafter he walked down to a small coconut grove that belonged to them. The coconut grove was about four miles away from their ancestral house. He returned with about a dozen coconuts tied together thrown over his shoulder and then he would have his breakfast. Thus  the routine was maintained  by him even when he was in his late sixties

students can write this topic thus.

Strong root “, the first chapter of A.PJ Kalam’s autobiography “The wings of Fire “, included in the syllabus of Wbchse of class 12 shows how Kalam was stimulated by his father’s disciplined life.

Kalam in his autobiographic fiction sketched his father, Jainulabdeen as an austere man. He was a devout Muslim and lived a disciplined life, bare of any sort of ‘inessential comforts and luxury ‘He would rise early enough to complete his ‘Namaz’ before 4A.M.Then he would walk four miles to bring back home about a dozen of coconuts tied together thrown over his shoulder from their own small coconut grove. Only then he would have his breakfast. He continued this routine even when he was in his late. the sixties. . In the evening, he used to visit the local mosque where after namaz, he sanctified the bowl of water brought by the people of different religions with a prayer to cure invalids. He also often held spiritual talks with PLS, the high priest of Rameswaram temple.

The hardworking nature of his father inspired little Kalam to become like him –patient and wise.He was so motivated by father’s characteristics that he emulated his father in his own world of science and technology and realized the fundamental truth of life.

In ‘The wings of fire’ we find not only events of In kalam’s life but his philosophical insight into life as well. Besides being a scientist, he had enormous knowledge in the field of human philosophy.

His father had not any formal education,  but he had profound innate wisdom. Here is another very good example of his wisdom.

He believed that adversities provide the best opportunities for introspection. So one should try to understand the reasons for his troubles instead of getting afraid of it. One can truly judge the mistakes that one makes. According to Kalam’s father, owing to their natural instinct, human beings look for help and the company of others when they find themselves alone in the grip of difficulties. They need someone to show the way out. Every troubled people wants a helper to show them the way to overcome their sufferings.

Here Jainulabdeen played the role of the helper. He satisfied the demonic forces by offerings and prayers. But he said that it was not a correct approach. He advised Instead of this a person should understand the fear-ridden vision of the future and the enemies that prevent that person to reach his goal, then that person should remove those enemies to reach his goal instead of being feared his future outcomes.

Kalam followed this philosophical vision throughout his life in his world of science and he was convinced that there is divine power that always lifts a person from his adversities and leads the person to the true way o his life.

5.“I have endeavored to understand the fundamental truths – who is the ‘I’ here? What are the most basic truths? Who told the speaker about them?

A.P.J Abdul Kalam, the author of the piece “Strong Roots,” was referred to as “I” in this case.
The fundamental truths here are that there is a spiritual force that can raise a person out of confusion, suffering, melancholy, and disappointment and lead them to their true position. And if an individual’s emotional and physical bonds are severed, he is on his way to independence, prosperity, and mental peace.

6. Explain how APJ Abdul Kalam grew up in an environment of social harmony.

Strong Road strong roots is the first chapter of Kalam’s best-selling autobiography Wings of Fire published in the year 1999 where he examines his early life hardship, fortitude. Here Kalam depicts the interpersonal environment beautifully. He was brought up in an environment of communal harmony which later helped him to form a personality and became one of the great personalities of India.

In his autobiography, strong root APJ Abdul Kalam traces his territorial route in the brick house of Mosque Street in Rameshwaram the locality, Which was built in the middle of the 19th century. Kalam locality was mainly populated by the Muslims but a little distance away near the Shiva temple the Hindus dominated. In this secular ambiance, both the communities lived cordially. His pious, austere father who attended an old mosque in the area, received people from all religions who waited for his father before the mosque. After prayer, he sanctified the water they brought in bowls and chanted it into an anodyne for the incurable maladies that made people invalid.

The spirit of communal harmony is also reflected in the attitude of Kalam father JAINULABDEEN. For example, he used to display tremendous respect to THE Hindus .for example pakshi Lakshana Shastry, the high priest of Rameshwaram temple happened to be a genuine friend of Kalam’s father With whom he discussed the complex spiritual matters wearing their own traditional attire.

So it can be said that the author’s human insight was outlined in his childhood and it is because of this bond of deep affection with his parents and this bond for human values that the spiritual and aesthetic vision of Abut Kalam developed.

7. What did Abdul Kalam’s father say to him about the importance of prayer?

Answer: Abdul Kalam wanted to learn more about the importance of prayer and spirituality from his father. His father responded that prayer allows for spiritual communion between people. When a person prays, he transcends his physical body and merges with the universe, which is devoid of money, age, caste, or creed. In terms of spirituality, he told Kalam that every human being is a unique entity within the overall manifestation of the divine being. Kalam’s father advised that a person should not be afraid of his or her problems, sufferings, or difficulties. One should make an effort to comprehend the significance of his sufferings. Adversity provides an incentive for introspection at any time.

8. Who was Jainulabdeen’s closest friend? What did they talk about? What did APJ Abdul Kalam’s father have to say about prayer?

Pakshi Lakshmana Sastry, the high priest of the Rameswaram Shiva Temple, was a close associate of Jainulabdeen.
They used to talk about spiritual matters when dressed in their traditional garb. There is nothing mystical about prayer, according to Kalam’s father. Prayer, on the other hand, allows for spiritual communion between people. We transcend our bodies when we pray and become a part of the universe, which is devoid of wealth, age, caste, or creed.

Who said that, and to whom was it said? What is the word that the word ‘this’ refers to? Why do people flock to the person who has been spoken to?

This is what A.P.J Abdul Kalam told his father, Jainulabdeen. The word ‘this’ related to Jainulabdeen’s view of human beings having universal significance.

A.P.J Abdul Kalam’s father, Jainulabdeen, was able to explain complex spiritual ideas in simple Tamil. People of all faiths would visit him for mystical assistance.

10. Whenever they reach an impasse, they look to someone to show them the way out ”

Who is the person speaking? Who was it that he said this to? What exactly is a ‘impasse’? Explanation of the sentence

An impasse is a critical situation in which participants in a conversation are unable to reach an agreement. When no progress can be made, it is a challenging position.

When ordinary people find themselves in a bind, they become perplexed. They try to identify a director who can direct them in such a crisis. They are looking for someone to show them how to get out of such a difficult circumstance. In this phrase, Jainulabdeen expresses a notion that has worldwide relevance. He has a compassionate understanding of the human he

Broad questions-On Killing A Tree by by Gieve Patel

letter for special class for upcoming exam for class 9,10,12

Arthur Rimbaud –Asleep in the valley, Question and answer