SHALL I COMPARE THEE TO A SUMMERS 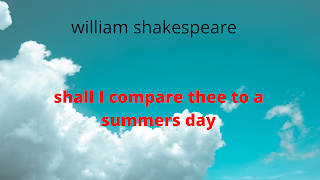 Or, What conclusion does the poet, Shakespeare draw at the end of the poem?

Answer: In the beginning, the poet Shakespeare features confusion if he would compare his friend’s beauty to that of the gorgeous summer’s day. But he then realizes that his friend is’ more lovely and more temperate than the summer, He also remarks that summer is extremelyshort and variable – cloudy, too hot, windy than on. But the poet firmly believes that his friends summer’ (beauty and youth) are immortalized in his Verse as long as people on earth will live to go through this poem. (Thus •this’ gives aliveness of the poet’s friend,) [Central idea -Actually life is  temporal but art is immortal.

Answer: In the very first, the poet Shakespeare makes a comparison between hisfriend and delightful summer’s day. Sumner season is more beautiful, charming and cozythan the seasons rest-But the poet thinks that the fair youth of his friend is ‘more lovely andmore temperate than the summer’s day.

Even summer (season/time) is simply too short,(subject todeath and decay) and variable – cloudy, too hot, windy and so on. But the fair youth of his friend iseternal, not fade. Nature• s summer will decline/destroy accidentally or by the principles Of nature (with the passage of time), whereas fair youth of his friend won’t under death’s threat-unchanged. Finally, summer’s day features alimited span, but his friend’s beauty is eternalized in hisSonnet.

The poet’s youthful companion, whom the poet adores and extols for his wonderful beauty, is referred to as “thee.”

The poet is a firm believer in his poetry’s timeless force. His poetry, according to the poet, has the ability to survive the ravages of time. That is why, in his poetry, he praises his friend. His pal will not be able to maintain his physical radiance and beauty indefinitely. His poetry, on the other hand, will ensure his immortality.
From generation to generation, the readers will admire his friend’s beauty. As a result, his poems will bring his young friend to life.

4]“Every fair from fair sometime declines.”

What do the words ‘fair’ in the first and second sentences mean? How does every fair decline from fair, according to the poet? What examples of such decline does the poet provide?

William Shakespeare says that  Every fair degrades from fair by chance, or nature’s fluctuating course untrimmed

Beautiful objects, according to the poet, lose their attractiveness as time passes. Rough winds, as depicted by the poet, kill or disturb the lovely May blooms. The sun shines brightly at times, and clouds reduce his golden hue at other times. The poet uses such examples to demonstrate how summer’s beauty changes while his friend’s attractiveness remains constant.

5]  Give the main idea of the poetry “Sonnet 18 Shall I Compare Thee to a Summer’s Day?”

Ans:-William Shakespeare praises the beauty of his beloved friend Earl of Southampton in his sonnet Shall I Compare Thee To a Summer’s Day. The poet feels that his friend’s splendor will never fade. May’s buds are subject to being blown down by strong winds. Summer does not last very long.

Because the sun is either too hot or too cloudy at times, all-natural objects are subject to change and decay. Time and death, however, will not diminish his friend’s beauty. His friend’s beauty shall be immortalized in this poem. The readers of the sonnet will remember his friend and his beauty forever. In this way, the poet’s companion lives and will live forever.

6]“But thy eternal summer shall not fade.”

In the above-quoted sentence, “everlasting summer” refers to the beauty that never fades.

“But thy eternal summer Shall not fade”

What is “sumner ” here? What dies eternal sumner refer un the line? How will his friends eternal summer not fade?

Shakespeare had a firm belief in his verse.He knows Art triumphs over both life and death. So he inscribes the beauty of his friend in the artistic lyrics to immortalise him.This idea of Shakespeare runs through the poem and echoes in the last two lines……..
The entire human race will read this masterpiece as long as they thrive. Thus,The poets friend’s beauty will be celebrated in this mortal world forever and relentless march of time will be failed to spoil the fame of his friend forever.Thus his friend’s eternal summer shall not fade.

7)Justify the title of the poem.

Shakespeare did not title any of his sonnets while composing them. They were only numbered. However, the first line of each of his sonnets is considered the title of that sonnet.

Shakespeare sonnet no 18 has been titled with aerotesis – retorical question “shall I compare thee to a summer’s day” .Through it the poet seeks answer as to whether he will draw a parallel between summer and his friend.

At once he argues that Summer is not only inconsiderate in its disposition, but also short lived. The heat of the sun is often insufferable. Again the bright Sun, the pride of Summer other goes down behind the clouds. .Finally the summer experiences two fold decay accidental or natural cyclical or psysiological.
However,Death is unavoidable, and it takes away both beauty and vitality.But Shakespeare had firm belief in his verse.He knows Art triumphs over both life and death. So he inscribes the beauty of his friend in the artistic lyrics to immortalise him .
Actually, The opening line establishes the ‘time love’ idea, which runs throughout the poem and gives the appropriateness of the title.

8)Explain the final couplet of the poem.

Sonnet no 18 was probably was written in 1590, but printed in 1609 by Thomas Thorpe . The poem asserts that poetic confidence can endow the glowing touch of immortality.

Summer is inconsiderate in its disposition as it shakes the darling buds of May.
it is not only rough due to it abrupt ghast of wind but also short lived. the heat of the sun is often insufferable. Again the bright Sun, the pride of Summer other goes down the horror in the dark or goes behind the clouds and pales into insignificance.Finally the summer experiences twofold decay accidental or natural cyclical or psysiological.
But the beauty of the poet’s friend is not inconsistent like that of summer. No ravages of time can snatch away his beauty. Even the cold cruel touch of death fails to drag down the imperishable beauty and splendour of the poets friend. Because Shakespeare will arrest the beauty of his friend in the eternal lines of his verse.The way an artist passes away leaving his art with a note of immortality, similarly an individual may die, but the verse in his praise gives him a touch of immortality. This key idea has been focused in concluding lines “”

The Eyes Have It #HS question answer