The story Karma written by Khuhwant Singh was originally published in his short storybook “The COLLECTED STORIES “in the year 1989. The central character of the story is sir Mohan Lal who fancied English culture but, at last, realizes his real identity.

Sir Mohan  Lal was a middle-aged Oxford-educated man who worked in the British Raj. He felt ashamed of being an Indian and never tried to talk in his mother tongue “HINDUSTHANI”.Rather he felt proud of talking in English which earned him a higher position in the upper class of the society. He was very careful and efficient in his appearance. His suit with carnation, the aroma of Eau de cologne, Malcolm powder, and scented soap made him different from others. He underestimated his wife and her relatives for their illiteracy and lower class mentality.

To attract English people, he wears Balliol Tie and even sips scotch. During traveling, he used to fill crossword puzzles of the English newspaper to show others his command over the English language. But at the end of the story, he was pathetically humiliated by two English soldiers whom he wanted to welcome warmly in his compartment. 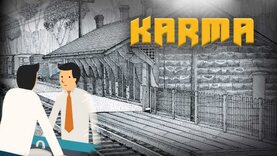 2. The character of LACHMI in the Prose – Karma by Khuswant Singh.

In  ” Karma” Lachmi was the wife of proud and arrogant Indian representative sir Mohan Lal. She was a typical middle-class lady of Northern India she was strong, short and middle-aged. Lachmi belonged to the uneducated section of Indian society. she did not speak English and was not acquainted with the culture and social order of the day.

Even she did make out the anglicized Hindustani spoken by her arrogant and proud husband, so she obeyed his orders passively. She wore a dirty saree and had the habit of chewing betel leaves. She was fond of gossip. Even she did not bother speaking to a passing railway coolie and the waiter. In the story, she was found eating cramped chapattis with mango pickle and washing hands in the public tap, while her husband did not leave the first-class waiting room to enjoy the scotch.

As she did not understand the manner of the upper class, she traveled in the zenana compartment at the time of traveling in the train. All these features clearly indicate that  Lachmi represents the typical middle-class illiterate housewife during the British rule in India.

In the story “ Karma” by Khuswant Singh, sir Mohan Lal is a proud Indian who likes   British ways and their manner. On the other hand, his wife Lachmi is a typical Indian woman of northern India. she is merely a housewife.

Mohan and Lachmi lived separately in the same house. Sir Mohan lived on the ground floor while her wife lived on the first floor. Mohan Lal not only liked her wife but also her relatives too. As they were illiterate,  he did no allow them to his bungalow. As they lived separately, they did not travel together. Mohan always journeyed in the first-class compartment while her wife was allotted to the zenana compartment. The logic behind this separate traveling is that lady all did not know English culture and manner.
Sometimes at night, Mohan visited lachmis first floor. Then he ordered Lachmi and Lachmi passively obeyed his orders. There was no love in their conjugal life, so they did not get any child to bridge their broken relationship.
They were two people of different spheres. Their relation was exactly like servant master, though a servant gets more attention from his master.
21 Meetups About Questions And Answers Of O Henry ; S Jimmy Valentine Of Class 11/ You Should Attend

4)   Justify the title of KARMA of Khuswant Singh.

Karma” is a story by Khushwant Singh. It was published in his short storybook “The COLLECTED STORIES “in the year 1989. The central character of the story is sir Mohan Lal who fancied English culture but, at last, realizes his real identity.
The purpose of the story is to point out the moral consequences of a person’s good and bad actions. The word ‘Karma” means “Deed”. a person is rewarded and punished in life for the work he does. The story is about the pride of Sir  Mohan. Sir Mohan felt proud of himself for his high-class manners and cultured nature. He has embraced English culture a lot that he hates India and each thing belonging to India.
But his arrogance was punished when he was taken out of the train station by two Englishmen. That’s why the story is entitled “Karma”

5. In the story “Karma” When Sir Mohan saw two Englishmen approaching his coupe, how did he react?

When Sir Mohan Lal saw two Englishmen approaching his personal compartment, he was overjoyed. He always was a huge fan of the English language and culture. He considered himself to be an Englishman. He was dismayed to discover the compartment vacant. When he saw the two English soldiers, his face brightened up. He was aware that they were only permitted to ride in second class. However, he decided to speak with the guard in order to obtain his permission and to welcome them into his compartment.

6. what are the plans, sir Mohan Lal made to attract his fellow travelers?

Ans: In the story “Karma,” Khushwant Singh portrays Sir Mohan Lal as a high official who is extremely proud of his command of the English language.

He’d been in England for five years. He only spoke Hindustani sometimes, and when he did, he Anglicized it. He enjoyed conversing, and, like a well-educated Englishman, he could speak about almost anything: books, politics, and people. He still brought his bottle of whisky, his English cigarettes, and ‘The Times’ with him when he travelled by train. He boasted of his connections to Oxford universities, rugby matches, and Piccadilly prostitutes, and he despised Indian life. He thought his Hindustani wife Lachmi was a complete mismatch and spoke to her in anglicised Hindustani. He wished to have some Englishmen as fellow passengers on his journey so that he could have an impressive conversation with them.

He would fold his newspaper in such a way that the name ‘The Times’ was clear to everyone when doing only the crossword puzzle. His fellow passengers, he hoped, would notice his Balliol tie and English cigarettes. He expected to meet some English officers in his coupe at the Cantonment station. Two young English soldiers, however, shattered his daydream and brought him back to earth. They began their conversation in a brusque way, ordering him to vacate the coupe because it was reserved for the army. Sir Mohan attempted to clarify in Oxford English before threatening to have the documents attested. The two soldiers were furious and threw him off the train. As a result, the author portrays Sir Mohan as a megalomaniac.

7. Create a character sketch for Sir Mohan Lal based on his interaction with himself in the mirror in Karma by Khuswant Singh.

Mr. Mohan Lal spoke to himself in the mirror of a first-class waiting room at the railway station. The soliloquy exposed his personality. He gave a patronizing and sympathetic smile to the mirror. This is an observation about Indian stuff and Indians. The mirror has lost its smoothness and clarity here and there. Mohan, an Oxford-educated high brow, believes that everything in India is like that old dirty mirror.
Mr. Mohan Lal then looked in the mirror at his own portrait, which he liked because of his neatly trimmed mustache, smart and luxurious dress, and the fragrance of expensive perfume and talcum powder.Mr. Mohan Lal is a pro-English narcissistic aristocrat who takes pride in his own Anglicized manner, education, and affectation while being pessimistic about his native country’s culture, heritage, and way of life

.8.He was dismayed”– Who was he, exactly? When and why did he become dismayed? So, what did he do after that?

Sir Mohan Lal is the “he” in this case. Sir Mohan was dismayed to discover that his train compartment was empty when he entered it.
Sir Mohan Lal was the topic of discussion. He enjoyed conversing as if he were a well-educated Englishman on almost any subject. He was anticipating a fascinating chat with his fellow passengers in his cabin. He was sad because the compartment was empty.Sir Mohan lal sat in a corner of his compartment, his heart heavy, and opened the newspaper “The Times,” which he had read many times before.

8. What was the difference between Sir Mohan’s life in England and his later life in India?

Sir Mohan Lal, the protagonist of the story Karma, was described as an anglicized, well-educated, polished character who loved and practiced English etiquette and culture. His five years in England, he says, were like fairytales. Oxford Colleges, masters, tutors, boat races, and rough patches were all part of the scene back then. Grey bags, gowns, sports blazers, and mix doubles were all the rage back then, as were evenings at the Inns and nights spent at Piccadilly. Those were the days of Sir Mohan’s five glorious histories.

Sir Mohan Lal, on the other hand, thought his later life in India was filthy, with vulgar countrymen and gruesome descriptions of his path to success, such as the nocturnal visit to the upper story to meet obese Lachmi, his wife, who reeked of sweat and raw onions. Those five years were spent in an almost dreamlike state with the British. Now, he only remembered those moments because of his international manners and his ability to communicate with Englishmen.

short questions and and answers of R K Narayanan Leela&#8221;s friend for class 11

An autobiography of a river -very important essay for the students